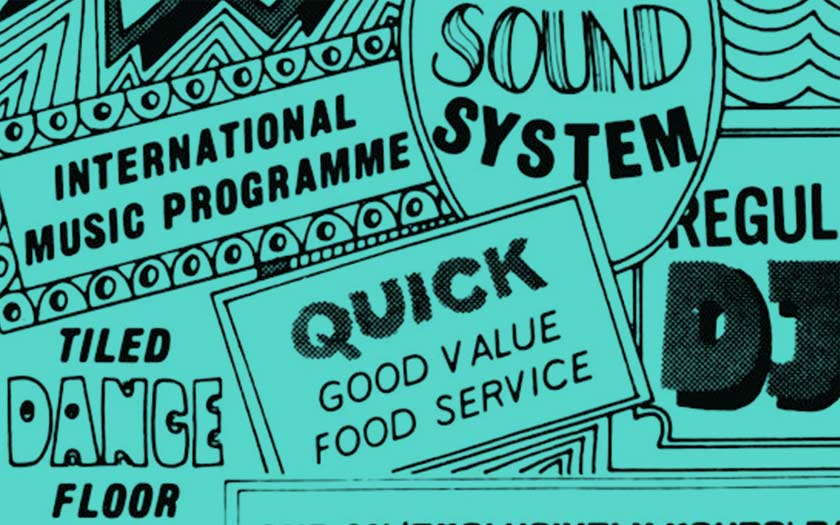 In 1968, the giant brewing firm Watney Mann attempted to lure young people back to pubs with a brand new concept, the ‘Birds Nest’, which turned ordinary boozers into swinging discotheques. And for a while, it worked.

First, some context: in the post-war period, brewers were struggling to make money from pubs and were desperate to make them relevant to a new generation of drinkers.

In the 1950s, they started with smart new buildings with modern decor; then they moved on to novelty theme pubs; and finally, in the late 1960s, along came concepts like the Chelsea Drugstore.

You can read more about the Drugstore in 20th Century Pub (copies available from us) but, in brief, it was Bass Charrington’s imaginative bid to reinvent the pub at what was then the heart of trendy London, the King’s Road.

With space age fixtures and fittings in gleaming metal, it combined shops, cafes and bars in one place and is perhaps best-known as one of the locations for Stanley Kubrick’s 1971 sci-fi film A Clockwork Orange.

The Drugstore opened in July 1968; Watney Mann launched its first Birds Nest in Twickenham in February that year, a low-risk location for an experiment.

They also installed an in-pub telephone network so that if you saw someone you liked the look of, you could dial their table and have a chat across the room.

It was an immediate success, at least according to contemporary press, such as this report from the Kensington Post from 17 January 1969:

[The] Twickenham Birds Nest has become the “in” inn for young people from all over southern England, would you believe? And packed every night, would you also believe? This came about largely through the ‘rave’ buzz getting around among 18-25 year-olds – inspired by the fun experienced there by early young customers – that ‘The Birds Nest’ scene was really different. Guys and dollies were even making the trip from Chelsea to Twickenham, would you believe, so loud was the buzz of approval.

This pilot inspired Watney to launch an early example of a chain, with the second Birds Nest opening a short distance from the Chelsea Drugstore and the similarly trendy Markham Arms, taking over The Six Bells. 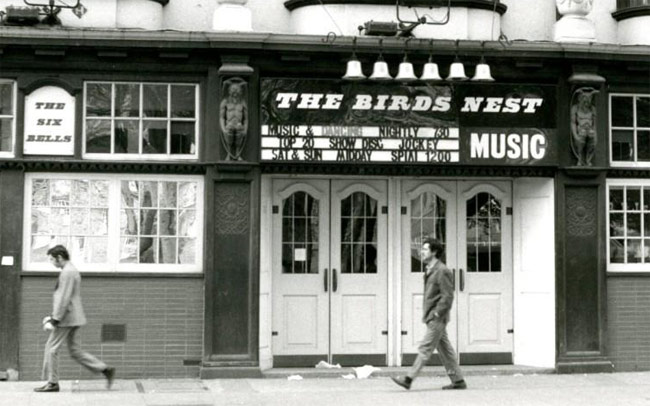 If Twickenham was an experiment, with a soft launch, the Chelsea branch got the full works when it came to PR with an extensive press campaign and advertising.

As part of that, we find a frank admission of one of the key points behind the concept and its name: if you went to a Birds Nest pub, there would be women to chat up. Dolly birds. Right sorts. Goers. And so on.

In fact, a headline in the Kensington Post boiled the concept right down: A PUB WITH GOOD COFFEE AND BIRDS ON THEIR OWN.

The argument was that with no cover charge, the provision of soft drinks and coffee, and the offer of simple ‘continental-style’ meals, the Birds Nest would be more appealing to young, single women – and thus, of course, to young men.

This second Birds Nest was done out to a higher spec, too. An internationally renowned interior designer, Thomas Gehrig, was imported from Munich:

His work in The Birds Nest could be said to have shades of a German Beer Garden. Here again, the perimeter of the room provides fixed seating arranged in bays to contain 6-8 people with tables and this perimeter seating is raised about 1 ft. 2 ins. above general room level. Over this fixed seating is a pitched roof supported on carved timber posts and the roof covering is cedar shingles. The bar counter is unusual in that it has no back cabinet as in a traditional pub. Use has been made of cherry wood wall panelling above the fixed seating. The dance floor (the only part of the room not carpeted) is surrounded by small tables seating two people at each. There is a supervised cloak room. (Ibid.)

Birds Nests were soon opened in old pub buildings all over London and the South East of England, from Paddington to Basingstoke, and each was launched with a press blitz.

Typically, a famous DJ or two would cut the ribbon and make an appearance in the first week – Simon Dee, Tony Blackburn, Dave Lee Travis and other names associated with the then brand new pop station BBC Radio 1.

Publicity photos from Watney Mann also bigged up the presence of “gorgeous go-go girls”, loading the clubs with models and dancers on those opening nights. When the Basingstoke branch opened, male model and choreographer Leroy Washington danced to “the latest 45s” in what amounted to a pair of Speedos. The message being, of course, that sexy times awaited you at the Birds Nest.

Not everyone welcomed this new development.

“Most of these houses are ill-lit, are painted black, have walls of black felt, and look like Wild West bunkhouses or brothels,” said one Watney’s tenant aggrieved at the move to managed houses. “They have been opened just to grab a quick fisftul of dollars from the permissive society.” (The Times, 30 January 1971.) Amazingly, he seems to have thought this description would put people off.

The other thing that made Birds Nest pubs different, and appealing, was the constant background of pop music, and especially soul – perhaps part of what prompted the antipathy towards ‘piped music’ within and around the Campaign for Real Ale? Again, from the Kensington Post for January 1969:

A super programme of recorded music is put out every evening from 7.30 until last orders. Every type of popular music will be presented including jazz and folk. On Saturdays and Sundays there will be special record programmes during lunch-time opening hours. At all times, when The Birds Nest Show programmes are not being presented, specially recorded background music will be played. The DJs, both male and female, form part of a team being trained specially for this and future Birds Nests.

It turns out that Watney’s training programme for in-house DJs was somewhat influential, for better or worse, giving James Whale his start in radio and cropping up in accounts of the birth of UK dance music.

And those at-table phones weren’t just designed for chatting up your fellow drinkers – you could also use them to call the DJ with requests, or to order a risotto from the kitchen. (Please use your phone to order from your table, via the app…)

In 1975, Watney’s went as far as launching their own Birds Nest record label. The first releases were ‘Give Yourself a Chance’ by Agnes Strange and ‘You Can Sing With the Band’ by Taragon.

Another part of the formula was the deliberate choice of young managers.

For example, Eric Robey, who ran the Basingstoke branch, was 20 and his wife, according to a report in The Stage for 18 February 1971, was “rather younger”. 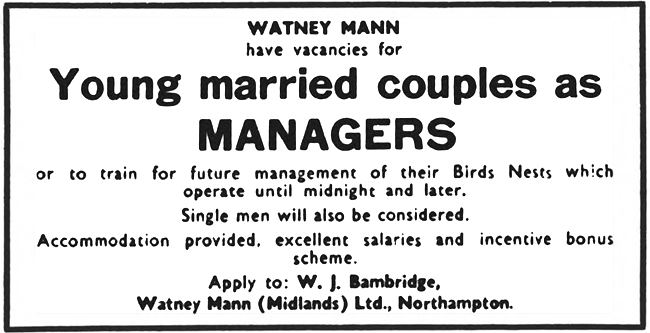 We asked an old friend, Adrian, if he remembered drinking in any of these pubs and he did, specifically the branch at 17 York Road, Waterloo, in around 1970:

The main attraction was, all the tables had phones on them, and all the tables were numbered, so if you saw somebody you fancied, you could bell them. Lots of fun. Must have made hundreds of calls but can’t remember receiving any! Saturday nights could be [rowdy] in the football season. Normal clientele, Chelsea and Millwall boot boys, could be lively when Portsmouth or Southampton fans were about. Bar and toilets downstairs, that was where the music was – mix of skinheads and rude boys; upstairs, the genesis of suedeheads.

Other accounts associate the Birds Nests with skinheads, too – a long way from the image Watney’s seemed keen to put across.

In 1972, a bouncer at the Basingstoke branch, 26-year-old Frank Stanley, was charged with assaulting Keith Baker with a truncheon, splitting open his skull. In court, he said he’d been issued with the truncheon by the management and that in his six months working the door, he’d been involved in around 150 fights: “I have been beaten up on two occasions and once we had a fight involving 20 men.” (Reading Evening Post, 6 April 1972.)

Behaviour at the Harrow branch, at a pub formerly called The Shaftesbury, prompted residents to petition to have the disco’s licence revoked in 1975. They said crowds were piling out after midnight, racing cars around Shaftesbury Circus and generally making a nuisance of themselves – especially on Monday nights. (Harrow Observer, 30 May 1975.)

In a 2012 post online, Denis Cook recalled his time DJing at the Harrow Birds Nest: “I played a variety of stuff, but it became that I started playing more Funk & Reggae, and within a short time you couldn’t get in… One day, the manager took me to one side and said he wanted me to change my music, as too many black guys were coming in. I refused and quit.”

With a growing image problem, with more ‘proper’ discos and nightclubs emerging, this corporate chain version began to feel like a relic of the swinging sixties.

So, inevitably, the Birds Nests began to pop out of existence.

The Birds Nest in Chelsea, one of the chain’s pioneers, had its disco identity toned down in a refit as early as 1971, in a bid to draw mature drinkers back. It closed in 1983 and became a ‘Henry J Beans’ bar and grill. That’s probably as good a full stop as you can ask for on a story like this.

What’s fascinating to us is that an institution can have been so prominent in the press, so ubiquitous in the culture, and then completely disappear from the collective consciousness.

But that’s pop culture for you.